Welcome to yet another edition of Off The Rack Comics, a travel back in time to revisit comic book titles of yesteryear. Once again I am covering comic book publisher Charlton Comics with one of their less popular horror comics, Creepy Things. In fact, it only ran for six issues.

Charlton Comics was one of the many companies in the 70s and early 80s that tried to compete with Marvel and DC. Though their quality and productivity may not have matched the two big guys, what they did produce was still fun and had a lot of charm and texture. In fact, when I think about comic book memories from as a child, I remember the Charlton titles more than the superhero ones. 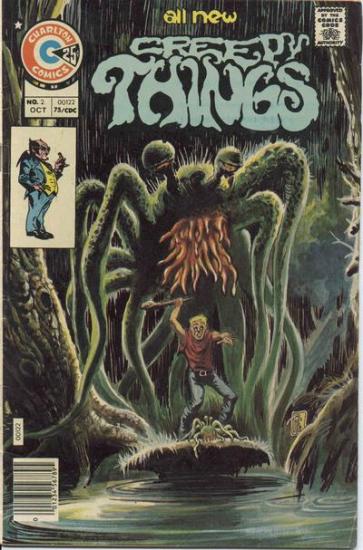 This short-lived series ran from July of 1975 until June of 1976.  As was the case with many of Charlton’s horror titles, they featured beautifully drawn and painted covers. These covers always drew your attention on the comic book racks. Though it didn’t start out as a hosted title, issues two through six featured a character who would introduce each story, much like the Crypt Keeper would in the Tales From The Crypt comics of the 1950s. This actually became the norm for many of Charlton’s horror comics.

Each issue featured three illustrated stories and then usually one page of a written horror short story. The stories and artwork varied in quality with each issue but some great artists, such as Tom Sutton and Steve Ditko, contributed to the series.

In 1977, Modern Comics released reprints of issues two, three, four and six in 3-pack sets sold in plastic bags in department and toy stores. The Modern Comics reprints featured the original art and even the same issue number, even though they did not reprint the full series. The cover price also went from 25 to 35 cents, even though you could only get them as a three pack. In addition to replacing the Charlton logo, a message was put in place of the bar code such as “Read Comics!” and “4 Color Thrills and Chills.” The tag line at the top of the cover of “all new” was also replaced with sayings such as “IT’S SCARY!” and “CRANKY…CRAWLY…” 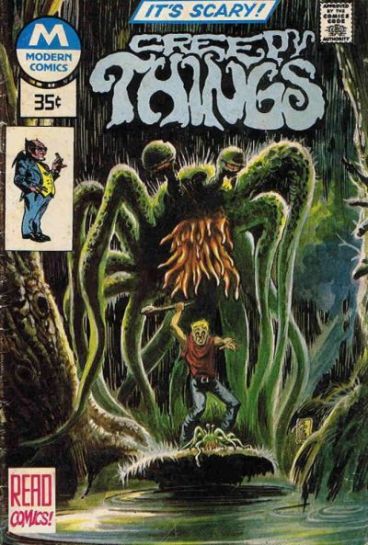 It’s a shame that this title didn’t last longer as it is one I thoroughly enjoyed, despite the inconsistencies in story telling and artwork. These issues also featured the well-known problems with Charlton titles with off set pages and printing errors, none of which were too distracting to be honest. I am still holding out hope that one day these series will be released in their entirety in a collection.

If you would like to read all of the blogs in my Off The Rack Comics series, please click HERE.