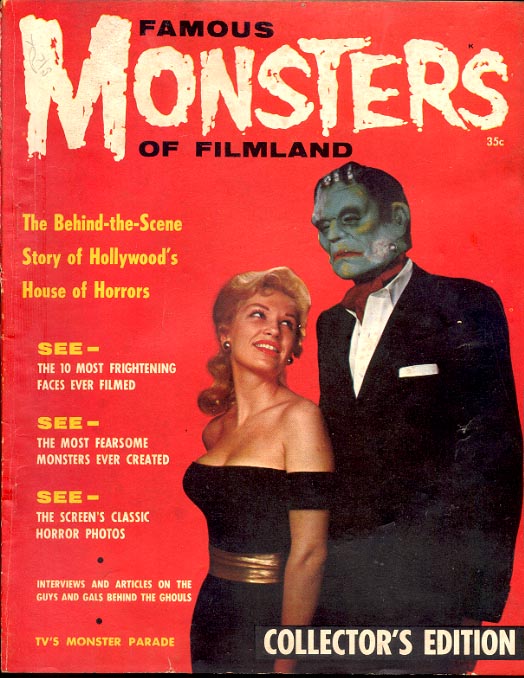 In 1958 the world was introduced to perhaps the greatest monster magazine of all time, FAMOUS MONSTERS OF FILMLAND. Nothing had been tried like this before and it became one of the longest running magazines as well, as it is still in print to this day, though with a different feel. James Warren and Forrest J. Ackerman were the masterminds behind this and the magazine created so many monster kids, many of which grew up to become special effects artists in some of the biggest blockbusters.

Though the premiere issue of FAMOUS MONSTERS OF FILMLAND did not feature monster goodies for sale, the second issue started something that became as important as the magazine itself; monster mail-order. This issue featured two pages of items and at this time you would order directly through Famous Monsters in Philadelphia, Pennsylvania. 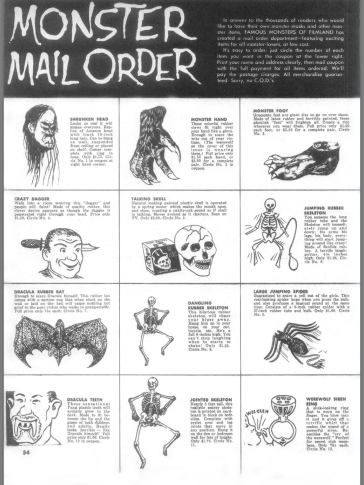 By issue three the number of monster goodies to buy went up to four pages. After that the number of ads increased per issue, some of which were paid ads from other companies, featuring things like body building guides, learning hypnotism and something called “U.S. Army Type Time Bomb.” By this time all of the monster items were sold by General Promotions, though it was still the same address of Famous Monsters.

As each issue progressed it became quickly apparent that monster items were here to stay! In addition to subscriptions, you could now buy 8 mm movies of your favorite monsters and movie projectors, scary music albums and six foot tall posters of Dracula, the Frankenstein monster and horror host Zacherley!

The official name changed to Captain Company starting with issue twelve in June of 1961. New items seemed to be added with each issue, some of which would never be allowed today. Though Venus flytraps were sold through comic books pretty regularly, selling live monkeys and sea horses were something new. I wonder how many of these poor animals either arrived dead or died soon after due to incorrect care? 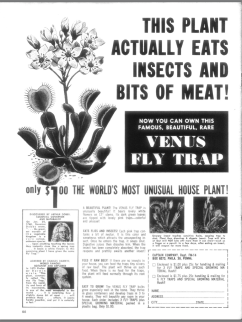 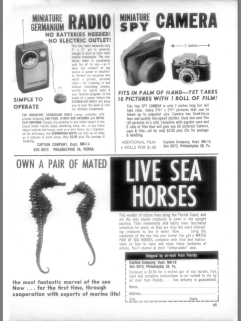 The first Aurora monster model kit, of the Frankenstein monster, was also released in issue 18 to be followed up with Dracula and the Wolf Man in issue 21. Then, in issue 24, both the Mummy and Creature From The Black Lagoon kits were offered, all for $1.00 each and 35 cents for postage and handling. Monster goodness for sale started showing up in other parts of the magazine as well. 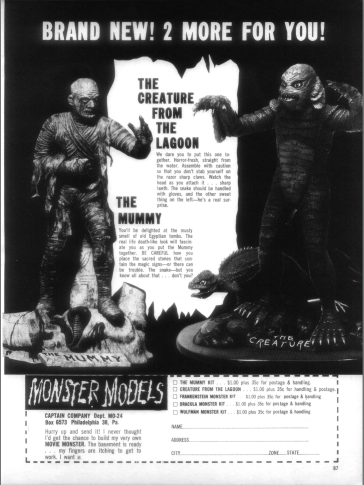 Monster masks were always a staple of the ads, starting with the second issue. These were all lower quality explaining the cheap price tags. Then something happened in issue 32. Not only were the cheap masks offered but all of a sudden masks of our favorite movie monsters started to show up. These were less than $5 each and based on the ad, they looked pretty good. The Frankenstein Monster, Phantom of the Opera, Count Dracula, Mr. Hyde, the Mummy and the Wolf Man were all represented as well as Herman Munster, Lily Munster and Grandpa.

Then, on the back of the cover of issue 33, in full color, were the deluxe Don Post Studios masks going for $34 each. In May of 1965, when this issue came out, $34 was a lot of money for a monster mask. I wonder how many children actually got them. For me, the masks were my favorite part of the Captain Company ads. I loved both the recreations of the movie monsters as well as monster masks from the rest of their line. I remember wanting all of them as a kid.

As the popularity of model kits increased, two of the biggest monsters of all time both received their own kit. These were Godzilla and King Kong. Super-hero model kits such as Superman and Batman started becoming popular as well. Three other monsters got their own kits as well. There was the Witch, Dr. Jekyll as Mr. Hyde and the Bride of Frankenstein. Then there was one of the most controversial model kits ever, the Madame Tussaud’s Chamber of Horrors Guillotine. 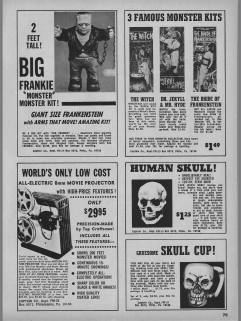 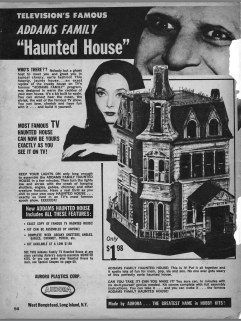 The problem with this kit, according to parents, was that it was too morbid as it actually worked! You could trigger the blade to come down and and chop off the head of a person. Parent’s groups made a stink though and eventually production of this kit ended (though it was re-released in 2000 by Polar Lights).

Warren Publishing also started publishing other magazines. Some were one-shots featuring a certain movie. Others were genre-specific, like one on horror movies and one on science fiction movies. They also started producing three black and white comic magazines; CREEPY (started in late 1964), EERIE (started in September of 1966) and VAMPIRELLA (started in September of 1969). All of these magazine titles also featured the Captain Company ads in the back of each issue. 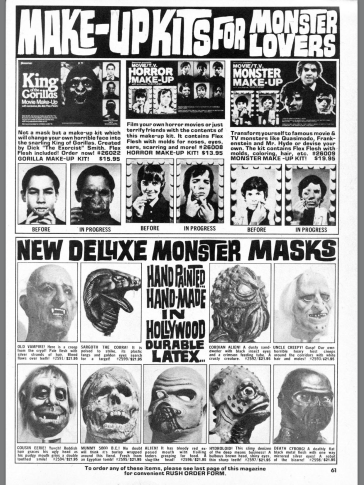 FAMOUS MONSTERS OF FILMLAND has done so much for us monster kids. When we would be made fun of at school for liking monsters or discouraged by our parents saying that monsters were a waste of time and money, at least we had this magazine and all of its readers as a supportive family. What was created here was something magical and to this day, it has not been achieved again. Other monster magazines have come and gone and though they tried, I don’t think any of them had the lasting impression that FAMOUS MONSTERS OF FILMLAND and Captain Company had.