I have always been a fan of not only monsters but of Halloween. It was only natural for me that in 1985 I combined both loves into a small yard haunt. Each year the display got larger and it eventually got to a point where I had more than 30 people volunteering their time to make sure that my haunted yard (known as FRIGHT NIGHT since it was only open on Halloween night) went off without a hitch. It was at this time, in 1989, that I met James Lurgio, another resident of Jamestown, Rhode Island. Unbeknownst to me he was also a fan of monsters and Halloween and after one of my shows he called me. I invited him over to see my collection of masks, props and costumes and we have been friends ever since.

As our friendship grew so did our respective collections. James even started helping me with my annual haunt and oftentimes, when I no longer needed a mask or prop, I would retire it to James’ collection. Before I knew it he was doing his own yard haunt and then that developed into a haunted house at the local recreation center. Back in those days, Jamestown (an island that is 9 miles long by 1 mile wide) was very lucky…it had two amazing Halloween traditions to visit each October. I eventually retired from home haunting but James kept going with his love. He eventually moved his haunt to Belcourt Castle, an actual haunted mansion in Newport, Rhode Island and then he worked with Spooky World in Massachusetts before taking the show on the road to Salem.

Salem, MA, well-known for its Halloween tourist season thanks to the infamous witch trials of 1692, is now home to COUNT ORLOK’S NIGHTMARE GALLERY. If you are a fan of horror cinema then this is the place for you! NIGHTMARE GALLERY opened in 2007 and it is Salem’s only monster museum, showcasing over 50 life-sized recreations of the horror genre’s most memorable characters. This labor of love really needs to be seen to be believed!

Growing up I never made it to Salem and it wasn’t until recently that visiting Salem became an annual Halloween tradition. In addition to all of the great offerings to be found in this town, COUNT ORLOK’s has never disappointed and now, at its new location, it is bigger and better than ever. The whole set up is amazing, and it brings back so many memories of some of my favorite monster movies, past and present. I give James credit…this is definitely a labor of love and his efforts show through with a professional and fun monster exhibit.

David: What drew you to collecting monsters?

James: YOU know this story better than anyone. At least you were a big part of it. Of course I met you in the late 80’s but before I met you, I was always content in my room as a kid with toys but they were always “creatures” in some way. The monsters started being a part of my life around the mid 80’s when I would visit shops around Halloween and find whatever my favorite mask was for that time and my Mom would spring for it as a treat. I had a few really neat ones when I started visiting YOUR haunted house around that time. I remember the vibe most of all. It was indescribable. Yours was the best home haunt I’m likely to see in my life time. It wasn’t over done, it was wasn’t sparce, it was just right. Every outdoor tableau or scene was thoughtfully detailed and well-organized. I remember going early to it once and approaching the front porch where someone, maybe your wonderful Mom, told me that it would begin later on and to come back then. Well, I did and the lines were always around the block. The things I would see in that place sparked my imagination and in many ways have inspired what CONG has become today. The props and masks and monsters you had collected were amazing. Even my young eyes could discern that the quality was something I wanted to pursue in my own collection.

David (blushing a bit): How did you get into this business?

James: That’s a long story but I’ll try to be concise. Before I opened CONG at its first location in Salem on Derby Street, my collection was only displayed to the public in October. I had gotten in with someone who was trying to open the third incarnation of Spooky World and was producing an indoor haunted house park at the Bayside Expo Center in Boston. In 2005, I was asked to produce a small museum of film monsters for that show and it was to be called “The International Monster Museum”. I was happy to do it and I brought everything I could to the show. I did this 2 more years when I was inspired to explore Salem. A friend of mine had an attraction there and I was hungry to have something permanent. He said, if he could make it in Salem, I could too. So I started looking for locations. It still seemed like a very nebulous concept. I had been working in Newport as a Concierge for some years and the enjoyment in that had gone away. I was ready for a change but I wasn’t about to leave and work for someone else. I’m lucky, my parents have always been very supportive. I discussed this weird thing with them and they decided to take the leap of faith with me and we rented 285 Derby in July of 2007. That’s the CliffsNotes version.

David: What drew you to Salem to open COUNT ORLOK’S NIGHTMARE GALLERY?

James: Well, most of that was answered above but knowing my friend had this attraction there for years gave me faith that I might be able to do something similar.

David: What’s a monster/horror movie that still gives you the creeps to this day?

James: Honestly, I know I’m supposed to name some classic that everyone who reads this will silently nod their heads and smile about but I don’t really get the creeps like I used to. At least not by movies. Reality is way more frightening these days. But if I were to think of a sub genre, it would be the supernatural thriller. Director James Wan is giving me the creeps these days. But I’m a big fan of a LOT of great movies going way back. I just watched the trailer to the new PET SEMATARY movie and watching it I was reminded that the old PET SEMATARY movie still gives me the heebie jeebies. 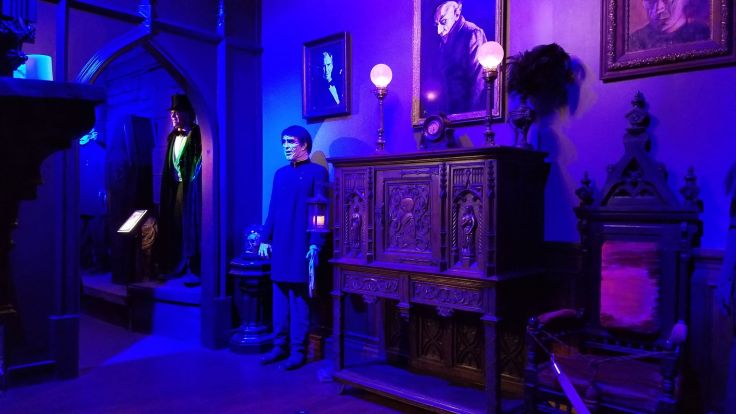 David: If you had unlimited funds, what is your wildest monster business dream?

James: Of course it would be to expand CONG in a big way. What would it look like? I’m not sure. I’m very proud of the museum right now but I know a huge influx of money would make it better. Though I do like the challenge of producing some really high-end looks on a relatively modest budget. On the other hand, I would love to attach to that a very immersive haunted house experience. ALL automated! Like the Haunted Mansion in Disney. That would be so much fun!

David: If you had to get rid of your entire collection except for one piece, which one would it be and why?

James: Oh god.. I have to admit I’ve put a little thought into this but never get to the part where I have to decide which piece or pieces I’d keep. Super hard to say! Uhhh… I have NO idea. I love them all! Let me get back to you on this one.. Is it just collection in general? Or are there categories? There are so many different pieces. But if it was pick ONE MONSTER thing it would be…. I have no idea.. Please don’t make me choose!!! As an aside, people always ask me my favorite monster. Impossible to choose. I usually pick the newest one and ans their favorite. Do you have a fave, Dave? (Editor’s note: if I had to choose, it would be my deluxe copy of the Don Post Yeti, that originally came out in the 70’s). 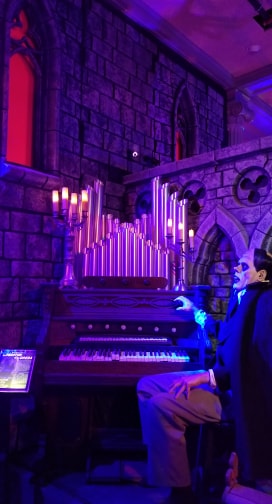 David: You’ve amassed quite the collection over the years, some of which isn’t even on display at Count Orlok’s. Is there a Holy Grail piece you still hope to have someday? If yes, what is it and why (and if possible, provide a picture)?

James: There are ALWAYS Holy Grail pieces. SO MANY! It’s hard for me to pick just one! I’ve been a fan of Mike Hill’s work for ages. He’s one of a few who manage to take hyper-realism to the next level. He’s done renditions of Karloff as the monster and Lugosi as Dracula that would be on that list. Beyond that, I’d like to get my hands on some stable film props. Maybe an original piece from some of the more iconic horror films out there. An original Jason hockey mask or THE original Freddy Glove or an original Michael Myers mask from the first film. There’s a guy somewhere who claims to have an original. Could be!

David: You meet someone who has never seen a monster movie in their entire life but are interested in a few recommendations. What would you recommend?

James: I don’t have kids BUT, I encounter this every now and then at CONG. I think if the kids have the attention span, they should start from the beginning. The silent films that started everything and then go from there. Maybe PHANTOM OF THE OPERA or NOSFERATU?

David: The hobby of collecting monsters is not something everyone has or understands. How has the reactions been by your friends and family?

James: I’ve gotten all different reactions over 30 years of collecting. Most have seemed supportive and fascinated by the collection. Others just haven’t gotten it. I remember in high school one date I brought home to see my display at my parents house. The reaction was literally, “You’re proud of this?” That said, it hasn’t happened often. If people have been reviled by it, they haven’t conveyed that. Now that the museum is what it is, it’s almost always a conversation starter.

David: What do you think you’d be doing if you never opened the museum?

James: Well, before I opened CONG in 2007, I worked as a Concierge at a hotel in Newport. I always loved Newport and working with antiques so I’d probably have an antique or gift shop there. Either that, or working in a big house doing tours or something. I was a tour guide for years at Belcourt Castle in my 20’s. Had a lot of fun doing that!

I truly want to thank James for taking the time to answer these questions and for providing the pictures used in this blog! Make sure if you are in Salem that you check out Count Orlok’s Nightmare Gallery! If you are a monster fan, you will not be disappointed and you never know what horror celebrity may be there hanging out! Count Orlok’s can be found at 217 Essex St, Salem, MA 01970.